Summer has been and gone, Halloween is over for another year and the sound of fireworks have vanished. Now the sign of Christmas is everywhere you look.

I’m not the most festive person (I’m a Grinch) but surely everyone else agrees that Christmas adverts filling our ad breaks as early as the 7th of November is too much, too early?

This year brands will be spending a record £6bn on Christmas advertising with John Lewis spending a huge £7m on #MozTheMonster.

As a PR executive, I am intrigued how the 2011 John Lewis advert named – the long wait – has paved the way for brands to go above and beyond, turning Christmas TV ads in to big-budget campaigns across different platforms.

Social media plays a huge role leading up to the release of a Christmas TV advert. Engagement and impressions are the goal of this new generation of advertising and success is measured by views and shares online. It’s no surprise that for another year, John Lewis had the highest number of public social media mentions and most positive mentions. 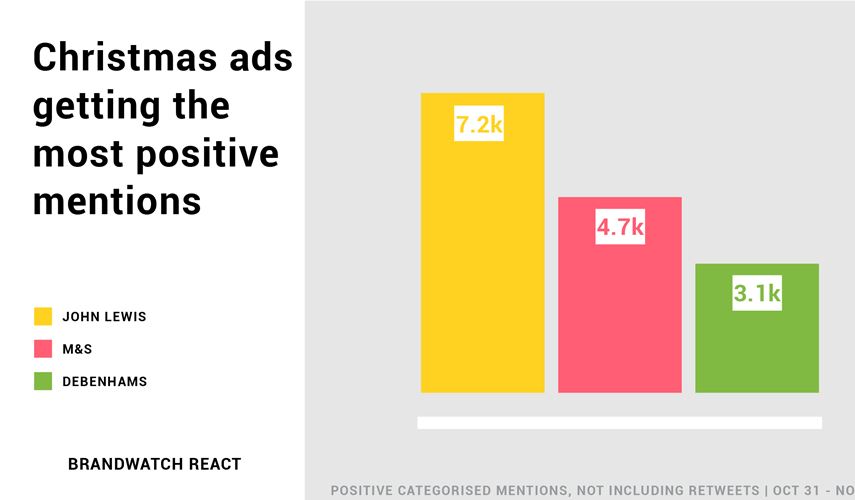 Not only have John Lewis created the Moz the Monster advert for 2017 they have continued to sell ad-focused merchandise including cuddly toy, branded mugs, a storybook of the film, and pyjamas and slippers. The flagship store on Oxford Street, claims it has the first farting and snoring window display and a number of stores have ‘Monster Maker’ stations, where customers can create their own Moz selfies.

It’s not just John Lewis, department store Marks & Spencer has teamed up with Paddington Bear and echoes the tactics used by John Lewis. This year M&S will provide up to 90 products including a soft toy version of Paddington and an adult duffel coat. M&S will host children’s book readings in store and encourage staff to carry out ‘random acts of kindness’ such as free marmalade sandwiches in the cafe´.

These campaigns generate millions of YouTube views and endless amounts of coverage that dominates the UK media. Its been six years since John Lewis hijacked Christmas, and I don’t think this phenomenon shows any sign of disappearing.

The survey of over 1,000 adults by the Advertising Association, showed that a third of Brits are more excited for the launch of Christmas adverts than the festive movie slate that includes Star Wars: The Last Jedi. With One in six said that they had in the past changed plans to watch the premiere of their favourite Christmas advert.

Karen Fraser, director of Credo, says: 2Christmas is a key time for advertisers large and small. Businesses delivering advertising with emotional resonance can be rewarded with powerful, long-term effects into the new year and beyond.”

Research from vlogging community Channel Mum does put into doubt whether the millions of pounds spent on Christmas TV adverts have any impact when it comes to where people, especially mums, choose to shop at this time of year.

Siobhan Freegard, founder of ChannelMum.com, said: “Despite some ads taking a year to plan and costing a rumoured £7m each, this year’s festive crop have left families feeling rather flat. None have the seasonal ‘wow factor’ or special festive feeling that is always so eagerly anticipated.

It was also suggested that this may signal a turning point for retailers and after realising the film-style epics aren’t guaranteed to get the till jingling we may see a shift to spread spend more deep and evenly throughout the year.

Christmas TV adverts are still wholly enjoyed by the Shorthose team and here’s a roundup of SRL’s favourite festive ads:

6 Reasons why *everyone should adopt the PPC approach to content

Working with bloggers, sponsorship, advertising and ASA guidelines – What you need to know

High in the sky – the dizzy heights of drones

Four reasons why you need UGC